skip to main | skip to sidebar

The Myth of the Monoliths 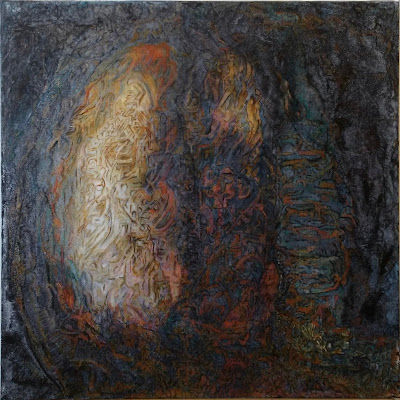 The Myths of the Monoliths
20"x20" acrylic on canvas

I'm interested in monoliths because, usually, they're created by ancient cultures. That taps into my very being--I feel the soul connection. Lately, monoliths have been part of the political discussion, as in "We are not a monolith." As a white woman over 65, I feel that declaration when stated by individuals who are part of another group of beings.

I am also interested in the word "myth," which can mean a widely held but false belief or a truth of a people. This election season revealed both aspects of myth. Oh, the stories we tell.

The monoliths in my painting do not stand completely separated from each other. They each have elements of the other. There are places where overlapping occurs, where foregrounds flow into each other. 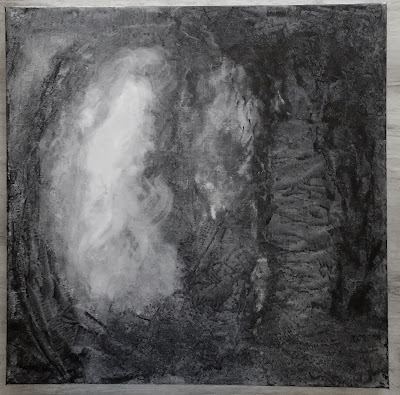 Step 1 was perfect grey applied with a brayer and then wiped off in places. This layer took about seven minutes, and it was so tempting to call "done." But where's the fun in that? The working title was "Feeling Some Kind of Way." Once I started working on it, though, monoliths emerged. I miss some of the white that's in the beginning layer but not in the finished piece. But, at the same time, I love what I replaced it with in the finished piece and don't wish those details/colors/forms gone. Ah the decisions, the settling in, the letting go. Pervasive part of the process. Some would say it's invasive rather than pervasive, though. Ha!
Posted by karen frances at 8:43 PM

Where my art can be seen

karen frances
Secrets of light and of dark. Manifestations of natural phenomena. Digital images of nebulae. Ancestral stories and myths. Dialogues of spiritual quests. Universal archetypes. Textural Components. And the concept of Wabi-Sabi. All influence the lyrical abstract projections of my truth. Early in the painting process, a metaphor arises, providing the foundation that supports the piece until compositional integrity is achieved. In addition to acrylic paint and mediums, I often use metallics and interference to push the drama of light and dark further, and random objects find their way into the composition to push the story further.